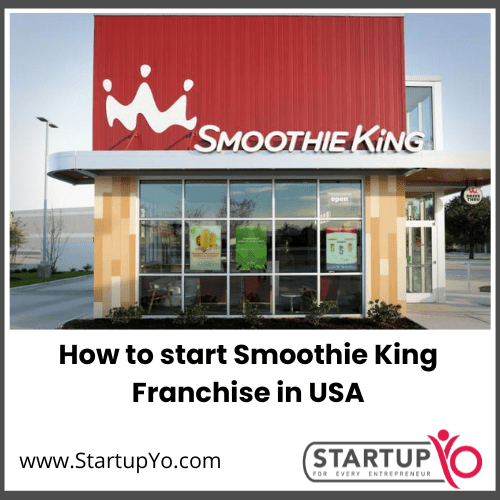 How to start smoothie king franchise in USA

How to start Smoothie King Franchise in USA

The story of “Smoothie King” started 50 years ago in 1973 under the name smoothies. In 1989 they opened their first juice bar franchise in New Orleans Louisiana under the name Smoothie King co. They have over 1000 locations across the United States as well as many locations abroad. Apart from the USA, Smoothie King also has locations in South Korea, the Cayman Islands, and its headquarters is located in Coppell, Texas.

The brand focuses on inspiring people to live healthy and active lifestyles which include fresh fruits, vegetables, herbs, minerals, nutritional supplements and more.

Smoothie King Franchise is full of benefits, they will benefit your business in many ways. It’s not only about starting a business but they also help you in making it successful with growing market share. They always keep in view the momentum of the company which helps stores to improve and develop.

Once you are in, the brand provides world-class support and helps you successfully launch a new Smoothie King store. In order to make development in the product they constantly test them and come up with brand new ideas and products to drive your traffic. As location is one of the most important factors to boom the business, its real estate team helps you in finding a perfect location point. Apart from this they train their newcomers  and support them because they believe if you flourish the whole family of Smoothie King Franchise will flourish.

The success of this privately held, Dallas-based franchise company lies in its Menu. Smoothie King offers a variety of smoothies to their customers such as Slim, Wellness, Fitness, Break time and kids. All these beverages are refreshing and keep inspiring people to live healthy lives. Its menu has always kept smoothie lovers engaged.

Smoothie King operates a large network of stores not only in America but also in other places. By December 2022, Smoothie King had opened 1,138 stores in the United States.

Money generating sites and quick expansion of Smoothie King speak everything about its success in the Food and Beverage industry. Its outlets are consistently growing and the pure flavor of its smoothies is making it a favorite spot. Its endless flavor of smoothies is attracting customers and turning it into a leading place.

As Smoothie King is a privately held American based company so only investors with net worth can make it accessible by clearing initial investment and costs before setting up. Its net profit is growing continuously and its Franchise model ensures the success of outlets.

They are dominating the Food and Beverage industry and are giving tough competition to their competitors. In this era of changing landscape Smoothie King is presenting and working over the Smoothies to create a new taste . In this competitive world their leadership is steady and it’s hard to reach their crown. Therefore starting the Smoothie King Franchise in the USA is profitable and worth investing.

Everything you need to know about credit score | StartupYO

Down payment requirements for a business loan?

How to refinance your business loan?

Getting a business loan without ITR- Possible or Not possible?

How much is a Smoothie King Franchise?

How much does a Smoothie King Franchise owner make?

Smoothie King Franchise owner salary can be up to $109,688 per year.

How to open a Smoothies King Franchise?