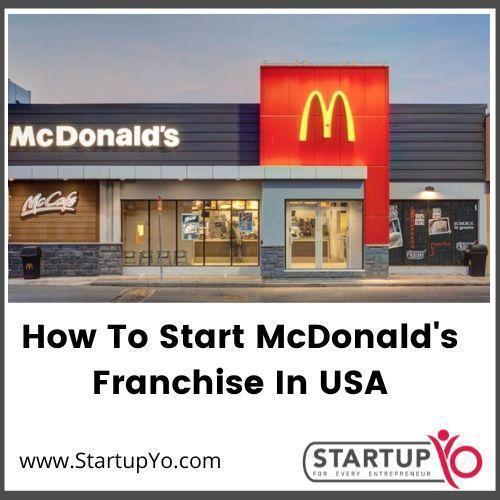 How To Start McDonald's Franchise in USA

McDonald’s Franchise in USA: Everything You Need To Know

Looking for a profitable franchise opportunity? Starting a McDonald’s franchise in USA may be just what you’re looking for. McDonald’s is undoubtedly the most successful fast-food restaurant chain in the world. Whether it’s a McChicken or McFries, everyone’s just simply lovin’ it.

Today, McDonald’s corporation operates over 40,000 outlets in more than 100 countries worldwide. Among them, 93% are franchise operations, and the numbers are constantly increasing.

McDonald’s is a significant brand, with many locations grossing well over $2 million per year. As a result, owning a McDonald’s franchise in USA can be a profitable business idea.

In this article, we will discuss all key topics related to owning a McDonald’s franchise in USA, including Cost, Processes, Investment, Requirements, Benefits, and How to Apply.

McDonald’s is a popular fast-food restaurant chain founded in 1940 in San Bernardino, California, United States. The company has been offering franchises since 1955 and relied on its franchisees to play a critical role in its success.

Today, it is the world’s largest fast-food hamburger chain in terms of the total number of restaurants. The fast-food giant has been present in the USA for over 80 years and currently has a network of over 14,160 restaurants across all 50 states in the country.

This is probably the most popular McDonald’s franchise option. These MCD outlets can be seen in standalone buildings, storefronts, food courts, and other venues.

Under this type, the franchisee can run a full-service restaurant that provides a high level of quality and consistency in cuisine and service to the public.

Under this franchise type, the franchisee receives the right to run the outlet in a retail store, strip mall, airport, university, hospital, or other diversified sites.

These outlets provide a scaled-down menu of typical McDonald’s items and, in some circumstances, non-branded McDonald’s products.

Under “Business Facilities Lease”, the franchisor awards franchisees with leases that include all business facilities.

McDonald’s has been in the fast food industry for over eight decades; many new restaurants have been established during that time. Still, it doesn’t affect McDonald’s popularity and entrepreneurs’ interests in it.

Currently, the franchisor offers two franchise options: Setting a new franchise or owning an existing one. The investment and the cost incurred in either option differ due to various factors.

As an emerging business opportunity, several entrepreneurs try hard to own a new McDonald’s franchise. However, the approved candidates can expect to shell out between $481,000 and $2,450,000 to get a running franchise.

The estimated cost includes an initial franchise fee of $45,000. However, the costs may vary depending on the region, outlet size and store type.

The cost of owning an existing McDonald’s franchise is based on various factors, such as location’s profitability, sales volume and renovation needs. In short, it may cost upwards of $1 million or even more.

Some existing franchises wind off due a result of poor performance. In that case, the cost includes McDonald’s planned marketing fees to revive the business.

To own an existing McDonald’s franchise in USA, buyers must have 25% of the total cost in cash, while the remaining 75% of money can be borrowed from lending institutions.

Here’s a detailed fee structure for owning a new or existing franchise:

Process Of Opening A McDonald’s Franchise In USA: How to Apply?

McDonald’s accepts franchise applications from all over the world. However, approval is granted to only those who meet the required criteria of the company.

McDonald’s has set up a basic application process, so anyone can apply for it easily. The process of opening a McDonald’s franchise in USA is as follows:

Your journey to become a McDonald’s franchise owner starts with application submission. The online application form is available on the official website. Fill out your details and submit the application for review. You will receive an application receipt in your email.

After successfully submitting the application form, the McDonald’s franchise team will review the application and will contact you based on your eligibility. The assessment includes a phone interview and background and credit check.

If the application meets all the company’s requirements, you’ll be invited for a panel interview, where you’ll be provided further information about the franchise process and details of the agreement.

Your application will move further after it passes financial/asset verification. Once you understand all the terms and read the agreement, sign the papers, and you will officially be handed over a McDonald’s franchise.

The next step is paying the franchise fee and making the necessary investments for setting up the outlet.

After you have been handed over the keys to your new McDonald’s franchise, you and your staff members will have to undergo a training program. The franchisor runs Hamburger University (HU), the international training centre for the McDonald’s system.

What Are The Requirements For Starting A McDonald’s Franchise In USA?

The company has set up various eligibility criteria for applicants willing to start a McDonald’s franchise in USA. The eligible applicant must:

Benefits Of Opening A McDonald’s Franchise In USA

Independence Of Running Own Business

McDonald’s offers opportunities to run your own business independently. The company’s support system ensures to help you optimise sales and profits by maximising quality service.

Chance To Become A Member Of A Global Brand

By applying for the McDonald’s franchise, you stand a chance to become a member of the world’s renowned brand. The company offers franchisees and more than 38,000 restaurants with the support and resources they need to thrive.

By joining McDonald’s well-known organisation, you can enjoy personal and professional growth and satisfaction as an individual owner-operator. As a McDonald’s outlet owner, you can access award-winning advertising that reaches around the world.

As soon as you enter the training program, the company’s field operations and franchising staff will work directly with you. Their primary job is to assist franchise owners in maximising quality, service and cleanliness, which helps optimise sales and profits.

What Does A McDonald’s Franchise In USA Make?

According to the statistics, the average McDonald’s franchise generates roughly $2.7 million in revenue each year. That’s good enough annual sales for a fast-food outlet.

A profit of $150,000 on $2.7 million in sales isn’t even 6%, but that’s what franchisees earn after deductions of all expenses such as staff wages, food, supplies, and a range of other expenditures passed down from corporate.

McDonald’s is a well-established restaurant chain and has 30,000 outlets worldwide, with around 14,000 of them in the United States. In addition, the company has a proven track record of franchising dating back to 1955, which has played a significant part in its long-term success.

With a $1.8 million average initial investment, it would take upto 8.5 years to return your overall franchise cost with a 10% or higher profit margin. These estimates are based on the 2020 average median net sales of a McDonald’s franchise in the United States, which was around $2.9 million.

Except for 2019 and 2020, when 207 franchised stores closed, the number of McDonald’s franchises in USA has continued to grow. This closure of outlets might be ascribed to the poor economic impacts of the COVID-19 epidemic, which also resulted in the closure of several small companies across the country.

How Many McDonald's Restaurants Are Owned and Operated by Franchisees?

Franchises operate approx 93% of total McDonald’s outlets, while the remaining 5% of restaurants are owned and operated by the company.

What Does It Cost to Start a McDonald's Franchise In USA?

Why Should You Choose a McDonald's Franchise?

McDonald’s is the top leading fast-food restaurant chain in the world. Investing in a successful business like McDonald’s offers profitable returns.

What Is a McDonald's Franchise Grant?

A McDonald’s franchise allows franchisees to run a McDonald’s restaurant business in a specified area and utilise the McDonald’s System in that business for a certain time period.

How To Become A McDonald's Franchisee In The USA?

The first step is to submit the application form. Upon submission, you’ll receive a call from McDonald’s franchise representative. The team will check your eligibility and will provide you with all necessary documents.

What Is McDonald's Franchise Agreement?

McDonald’s franchise agreement is a legal contract that contains the information related to the deal, including its validity, costs and terms & conditions.